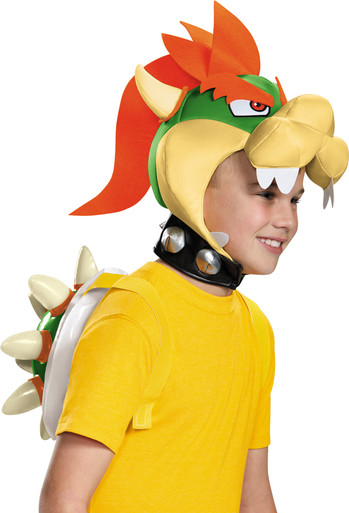 The Bowser Costume Kit is a quick and easy way to become your favorite villain from the classic Nintendo Super Mario Bros video game. Now you can be the leader of the Koopa troops and wreak havoc on the Mushroom Kingdom when you dress up in this Bowser Hood and Shell. The stuffed character Bowser Hood fastens under the chin and the inflatable spiked shell has yellow shoulder straps. Just add a yellow shirt to complete this Bowser character look. For a great group costume grab some friends to go as Mario, Luigi, Princess Peach, Toad and Yoshi. The Nintendo Super Mario Bros. Bowser Kit features an inflatable shell with straps and Bowser character headpiece. Shirt is not included.
TM & © 2014 Nintendo.