There’s a wide selection of haunted houses in the Chicagoland area, but there are a few that stand out from the rest. If you’re looking for a legitimately frightening experience that will stick with you long after the Halloween season is over, head to one of the haunted attractions listed below. But beware, you may not return.

Statesville Haunted Prison and City of the Dead

This longtime haunted attraction has been recognized several times as one of the best in Illinois. It’s taken either the number one or number two spot on Haunted House Chicago’s annual Top Haunted Houses list every year since 2008. The premise is simple; the prisoners have escaped and are out to get whoever dares pass through. But that’s not all; once you’ve made it through the prison portion of the attraction, you must navigate zombie-infested caves and mine shafts underneath it to make it out. There also is a Sniper Zombie Paintball Ride here, which has you shooting zombies while riding in the back of a five-ton Army troop carrier truck. The paintball ride is available only on Saturdays and Sundays. 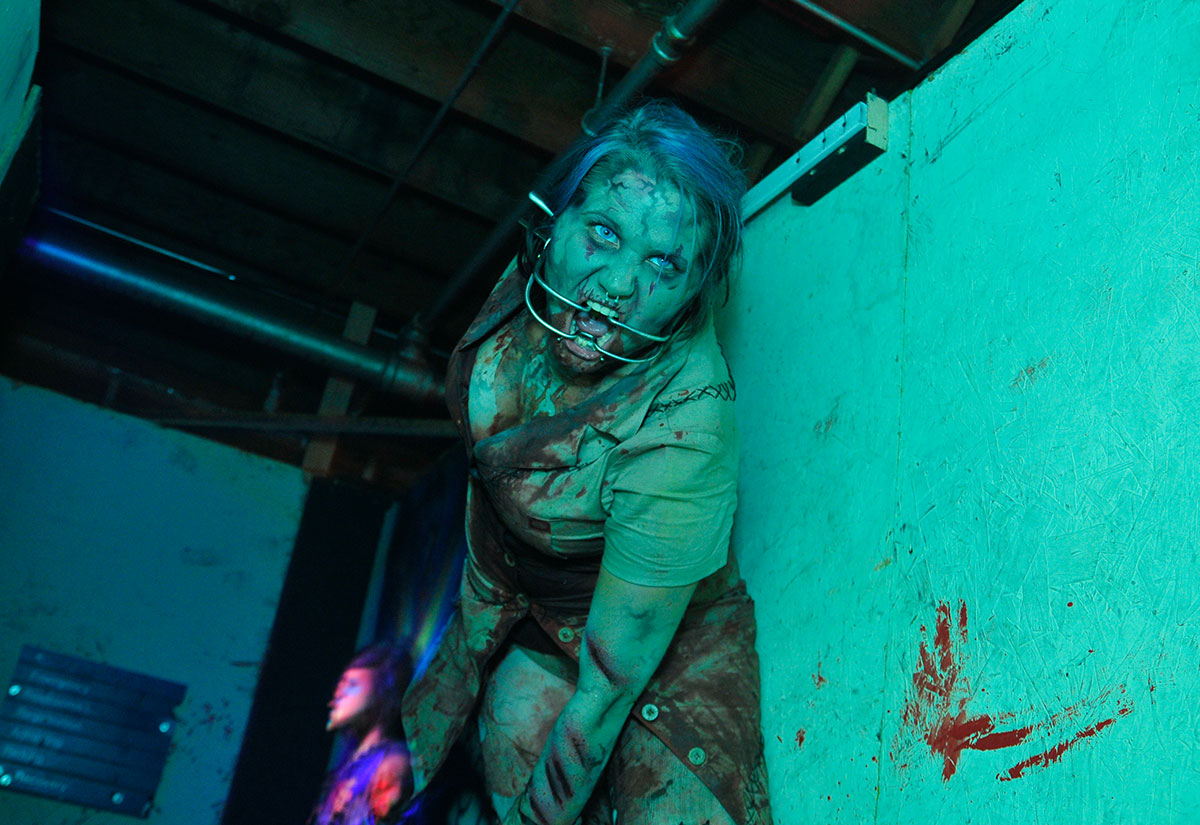 At this haunted house, you may get the biggest bang for your buck; it’s an hour-long journey from start to finish. On top of that, you have the option - with a VIP ticket purchase for an additional $20 - to take part in an experience named “Buried Dead or Alive.” Just like the name suggests, this add-on component is meant to simulate what it feels like to actually be buried alive. That’s something you won’t find at any other attraction on this list.

When: Dates and times vary. See the complete calendar for details. Last day open is Nov. 4. 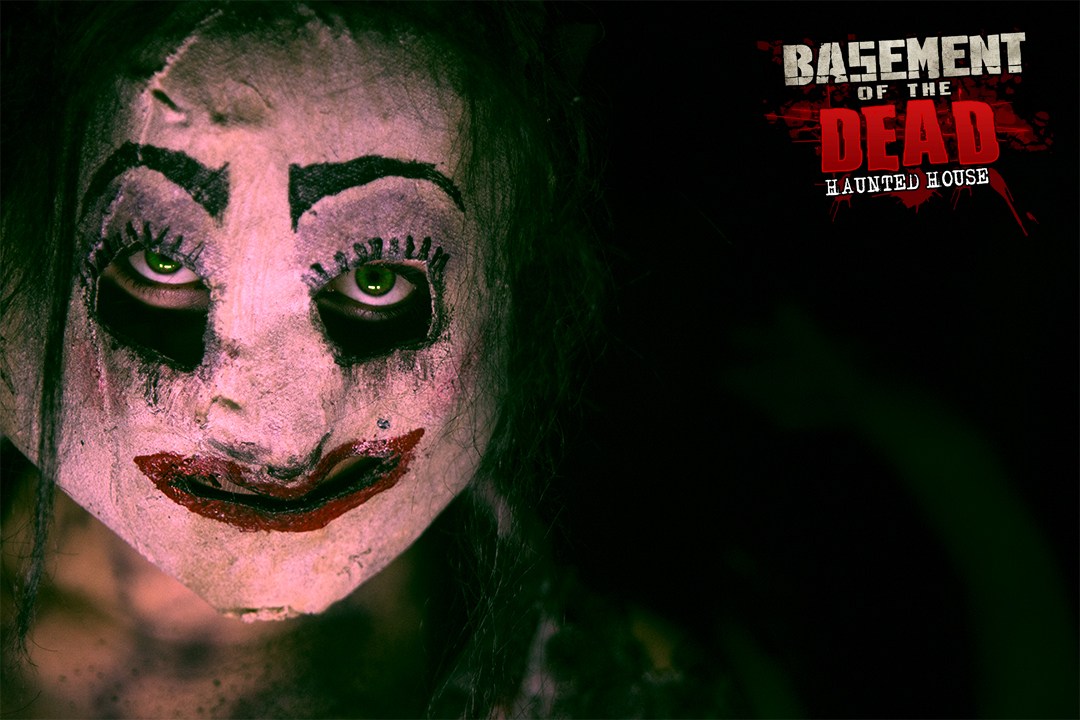 Basement of the Dead

This was rated the number one haunted house in Chicagoland by Haunted House Chicago and it was part of Buzzfeed’s list of “25 Haunted Houses Across America That Will Scare The Crap Out Of You” in 2016. Legend has it that Aurora’s largest laundry company, Walker Laundry, had two employees, Imus and Al Kilya, who suffered injuries from a boiler explosion in 1964. Following a series of gruesome murders in the building’s tunnels and sewer lines, the business closed. Imus and Al were suspected of the murders, but were never proven guilty. They are believed to still be haunting the sewers today.

When: Dates and time vary. See the complete calendar for details. Last day open is Nov. 4. 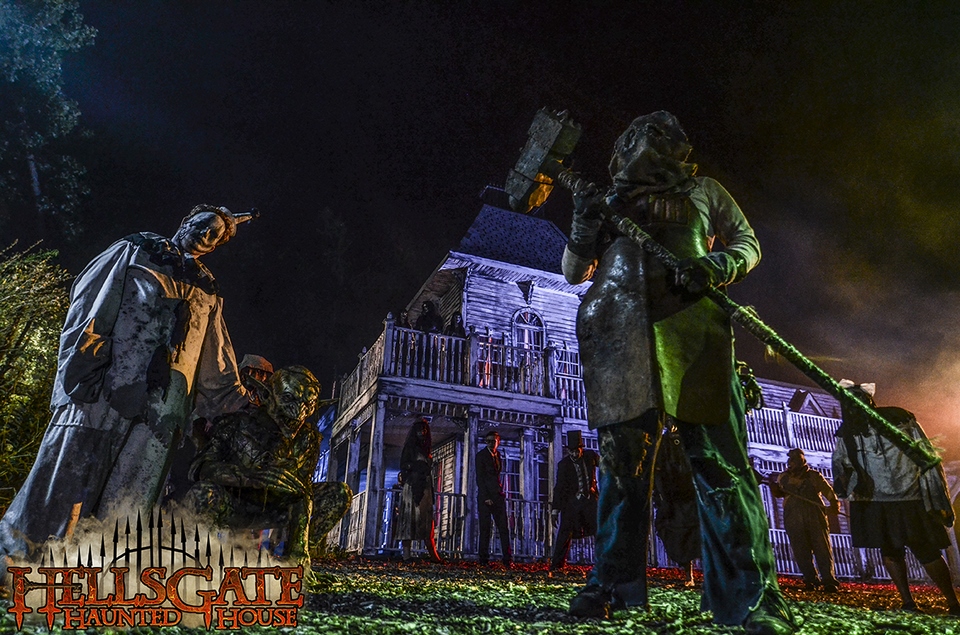 You may be frightened before you even arrive at this haunted house. In order to get to it, you have to park in a Metra train parking lot and get on a shuttle that takes you to a secluded haunted mansion in the woods. On your journey, you’ll go through the mansion, including the basement, and through a nearby dark forest and the Lost Souls Cemetery. You’ll even get the chance to ride down a giant slide. There also is a hidden key located somewhere on the mansion grounds, and if you find it your ticket is free. 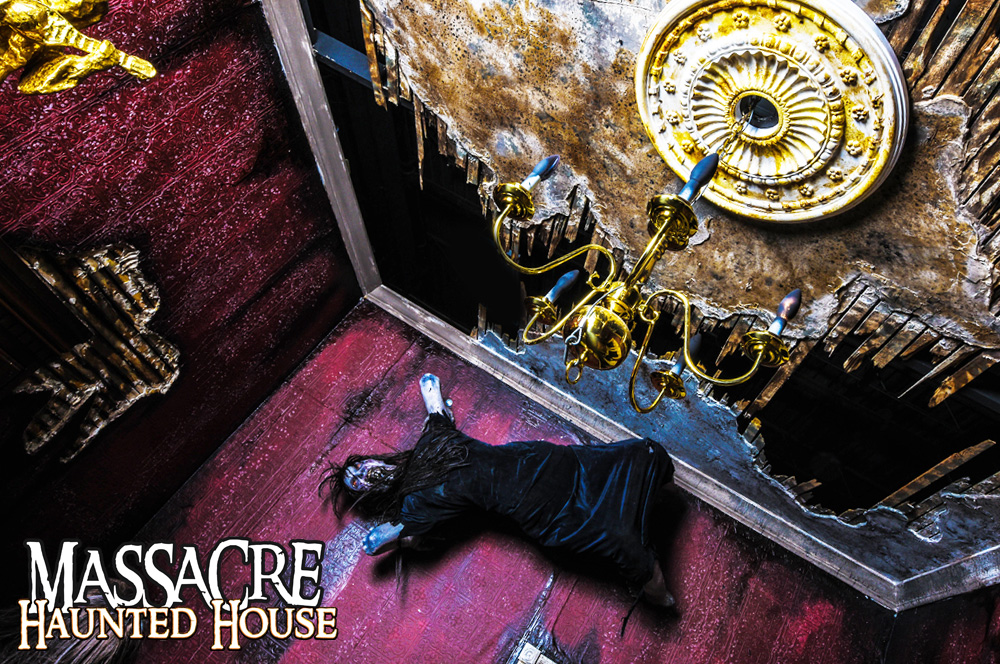 The Chicago Tribune rated this haunted house the best in Illinois in 2015. It’s been remodeled for the 2017 Halloween season, featuring new tombs and caverns, in addition to an abandoned mental hospital area. You also get access to the Freak Show 3-D experience, where you wear 3-D glasses through a series of sets designed with 3-D features. The entire waiting area at this attraction is indoors and heated, which is a nice perk if the weather is bad the day you go.

When: Dates and times vary. See the complete calendar for details. Last day open is Nov. 4. 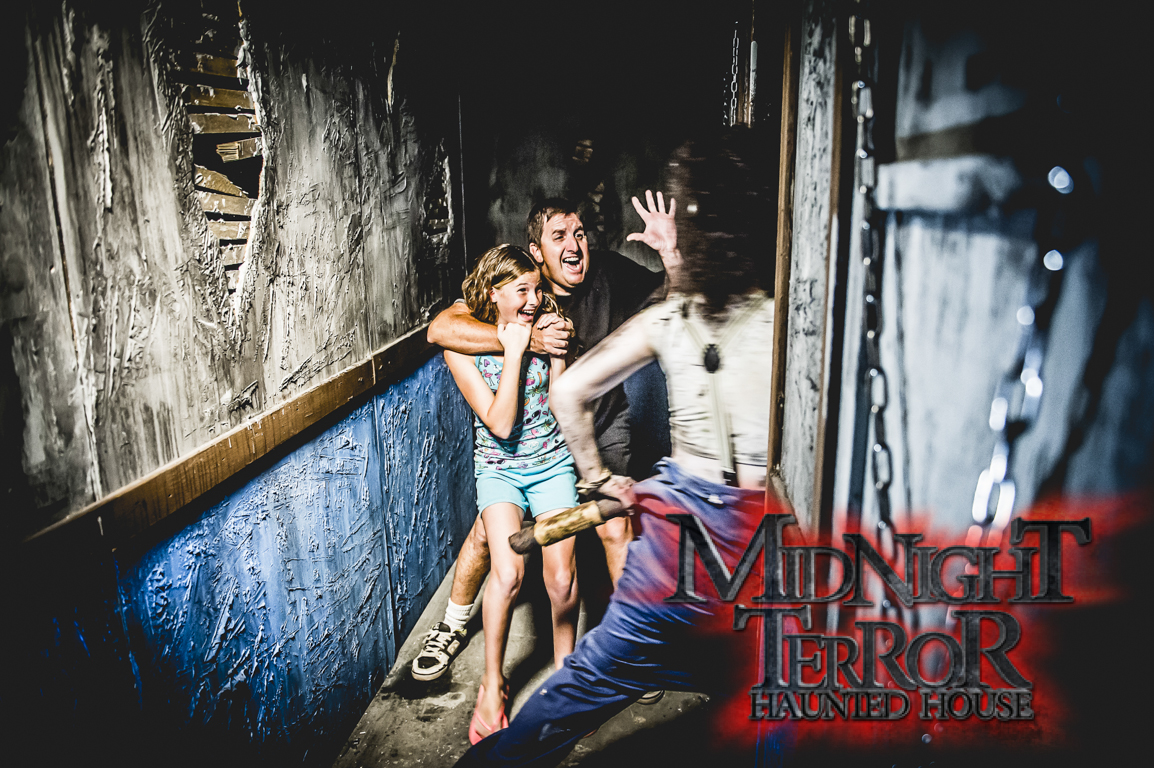 This haunted attraction features three distinct sections - Black Oak Grove, the Factory of Malum and Chainsaw Alley - each with its own backstory. Black Oak Grove follows a young girl who’s father has gone missing during a mysterious outbreak in her town. After her aunt and uncle start acting strange, she escapes and attempts to locate her father, who she believes may be in a nearby factory. That leads to the second section, which is about the origin of the factory. A man confronted by an evil spirit named Malum was convinced to build the factory, but it turns out the factory is haunted. The final area is outside the factory, where you’ll face the last few obstacles on your journey. 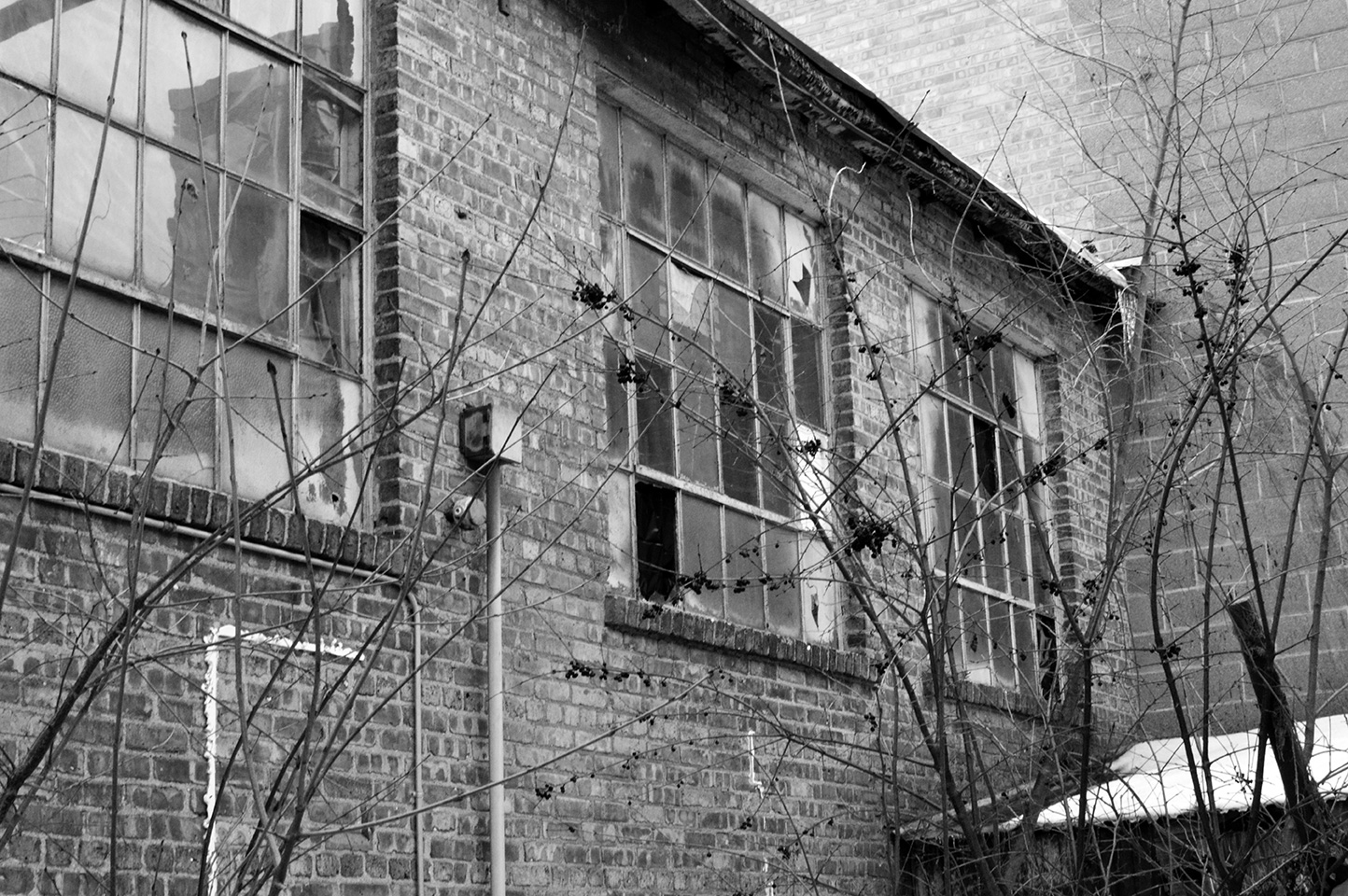 In the industrial section in Elgin, IL, there is an abandoned building that allegedly used to house the Elgin Casket Company. That sets the stage for this haunted warehouse, which features 55,000 square feet of scares spread across the multi-level building. The story dates back to 1890, when remains of early Elgin settlers in a nearby cemetery were dug up and moved. After the Elgin Casket Company moved into the building in 1940, there was a series of accidents and strange activities that occurred there, including murders, a cyanide spill and even cult meetings. Those occurrences have led people to believe the building is haunted. In order to find out, you’ll have to visit yourself. 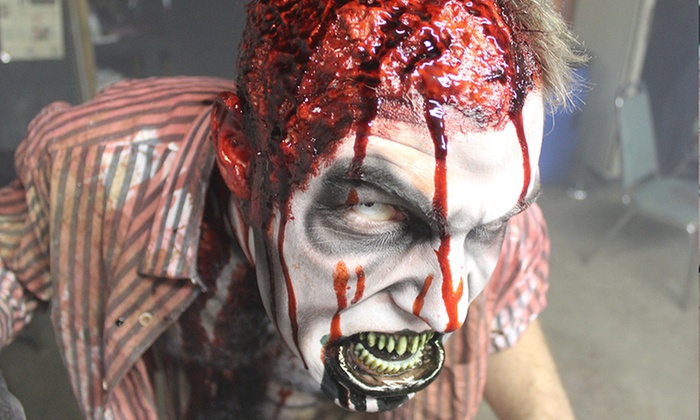 Most haunted houses on this list recommend not bringing children younger than 12 or 13. This one is different. The Realm of Terror may not be appropriate for anyone younger than 16, so don’t expect anything less than an extremely terrifying experience. The makeup effects are really what sets this haunted attraction apart; all the makeup worn by actors is created and supervised by Stevie Calabrese, who was featured in Season 9 of the Syfy Network television show Face Off. The realistic costumes and makeup on hand here will have you questioning whether or not the actors are really acting. 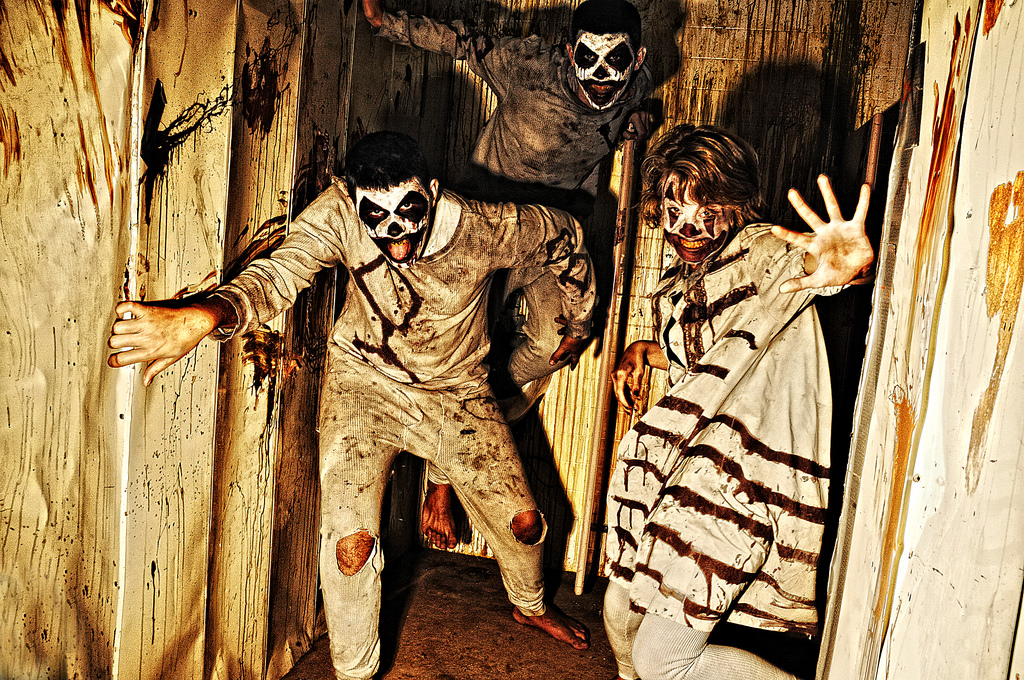 The setup for this haunted attraction is based on the classic mad doctor scenario. It takes place in an abandoned psychiatric hospital out in the countryside. Before the hospital was shut down, it was ran by Dr. John Amhurst, who’s wife suffered from a terminal degenerative disease. Dr. Amhurst had been conducting horrifying illegal experiments on other patients in the hospital in an effort to save his wife. There were more than two dozen bodies discovered when the hospital closed, and many other patients were found mutilated but still alive. Dr. Amhurst was never found. Journeying through the asylum will answer many questions about what exactly happened during Dr. Amhurst’s tenure there, and what remains as a result.

When: Dates and times vary. See the complete calendar for details. Last day open is Oct. 29.

There are three different haunted attractions here: Reaper’s Woods, Reaper’s Mansion and Reaper’s Zombie Revolt. Reaper’s Mansion is the haunted house component; it has you walking through three floors of creepy hallways and a variety of themed rooms. The Reaper’s Woods section is another walkthrough experience, but it follows an outside trail through the woods where actors can pop out at any moment. In the Reaper’s Zombie Revolt section, you have only a flashlight to navigate your way through a dark forest filled with zombies. If you’re looking for an attraction with several haunted offerings, this may be your best bet.